Leeks are my vegetable nemesis. I like leeks, enjoy their rich, onion flavor. I also think they look quite lovely. But some of my biggest flops in the kitchen have involved leeks. Their flavor is so strong, and turns so quickly and easily. I once tried to adapt a sweet potato and leek tart with, I think, potatoes, cheese, orange peppers and leeks. Maybe the grossest thing I’ve ever tried to eat. I think we ordered pizza that night.

So this time, I went with a tried-and-true combo instead of re-inventing the wheel. I’d never made potato leek soup before, but I’ve eaten and enjoyed it many times. I found this recipe from Bon Appetit, and stuck by it to the letter.

The verdict? Delicious, if time-consuming. While you do have to put in the prep time to chop lots of veggies, the simmer time to tenderize them, and then the rotating puree into a blender, this creamy soup also has the additional step of returning to the pot for added cheesiness. Once again, I found myself longing for an immersion blender. Maybe my next kitchen investment. 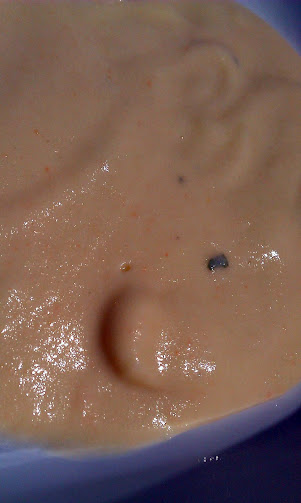 All that said, if you have the time, this soup is a great way to warm the kitchen on a cool winter Sunday night. Serve with crusty bread, mix in a few gnocchi for texture, or swirl in some of that pesto, and warm your insides, too.